There is an unsolicited relation between the zodiac signs and the personality of individuals born under that star or constellation. The knowledge of astrology is as ancient as any heritage monuments in the world. Many may discard the belief that celestial bodies have any effect on our personalities. However, for those who believe in it are susceptible to understand the scientific approach towards it. The belief has been derived from the ancient Hindu culture where they have simulated numerous conditions and devised a pattern to identify a personality based on the position of the stars and planets. Now, the ancient astrologers believed that wearing or carrying gemstones that belong to a particular astronomical sign reduces the adverse effects of the signs on your life. In fact, there is a strong connection between Amber and zodiac signs. Now, we will be discussing Baltic Amber, its history, its formation, and its relation with the zodiac signs. 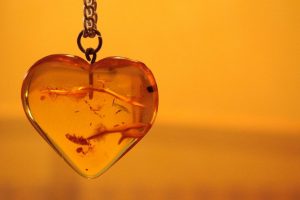 Amber is a fossilized tree resin which is considered as one of the organic gemstones. It is aged about 20 to 60 million years and has been in existence since the Neolithic times. This tree-resin is light in weight and has a warm texture. The Baltic region has the abundant deposit of amber which is predominantly known as the Baltic Amber or Succinite. The name Succinite is derived from the succinic acid which is a major composite of the resin. When the resin is time-hardened it produces the gemstone. The gemstone is also warm to touch and generates static electricity after gentle rub.

The structure of the gemstone is quite complex as it has a macromolecular structure which is arranged in a cross-linked pattern. In the ancient Baltic region of Greece and Rome, Amber was considered to be the costliest due to its various uses. The gemstone was used to make jewelry and various decorative pendants. Its usage is not limited to decoration but also used for clinical and spiritual purposes. There are pieces of evidence of its healing property and how the Amber was used in the ancient period to heal one’s mind and body. Leave Amber in water or wine for one to fourteen days which generates a liquid good for stomach-ache, asthma, etc. This is a major reason why Amber and zodiac signs share a room with each other.

Coming to the nature and shape of the Amber, this tree-resin is found to have a spherical shape due to the cohesive forces of the molecules. But, most of the time they are found to have hardened over a solid surface that imparts an elliptical shape to it which needs to be carved according to the requirement. Moreover, they can be sewed together by a thread or can be crafted into an ornament or pendants to make Great Baltic Amber jewelry which has been into use for millenniums.

Back to the square one, it is believed by astrologers worldwide that each and every zodiac sign has a specific element, constellation, and ruling planet that make the personality of a person. Now, each of the zodiac sign has specific tension attached to it which is felt by the person of that zodiac sign when the predictors are in perfect alignment. So, while selecting a gemstone, one should always remember to pick a gemstone to which they feel the closest connection with. Now, there are specific gemstones like quartz, emerald, and tiger eye which are very specific to work for their respective zodiac signs. On the other hand, the gemstones like Amber and Pearl can actually be efficient and effective for people of different zodiac signs as well.

Based on the relation of Amber and Zodiac signs, astrologers believe that it helps a person to be joyful and happy. They also make a very good “worry-bead” which lightens the burden of life. They occur in different colors as well, each having a distinctive nature. Yellow Amber is the most usual Amber found in the planet which can also be translucent. The stone was usually found on the shores of Baltic Sea which facilitated trading. The stone is often used as incense. So, if you have a problem in carrying the stone with you, you can light them up in your home and prepare for a meditation. Astrologers believe that lighting the Amber up and inhaling the fragrance works similar to that of wearing it. However, the most popular use of this Yellow Amber was for ornamentation, to make jewelry. Since it is easily cut and polished, it makes a good material to carve a baby Amber necklace. Astrologers suggest parents make this for their baby to nullify any harmful radiation from the celestial body and help the baby to be warm, joyful, and happy.

One of the rarest Amber is the Dominican Amber which is blue in color. The Dominican amber is fluorescent and turns blue in natural sunlight or in presence of ultraviolet ray. Unlike, the yellow amber, it is pretty rare and geologists find about 100kg per year. This makes the amber valuable and expensive.

Reasons you should wear Baltic amber on a daily basis

Every astrologer who succumbs to the fact that Amber has the power of spiritual healing prefers or recommends people to wear it or carry it on a daily basis. The extensive research on Baltic amber and the relation between amber and zodiac signs, it is prevalent that Baltic amber indeed is a great gemstone for every person. However, it is also a painkiller. In fact, the amber is known to alleviate various pains and support our biological interactions to help us stay healthy. Following are some of the reasons:

Apart from all the therapeutic and benevolent properties, there is another aspect that adds to Amber being a good choice. The low maintenance property of the gemstone helps you to wear and forget. Now, you are consumed with your daily chores and you do not have time to wash the gemstone every now and then. Moreover, the resin does not require any charging. The natural body heat is enough for making it effective. Wearing a Baltic amber jewelry helps in relieving pain, inflammation and keeps you happy and joyful. In addition to all the benefits of owning one, the gemstone is inexpensive but the value imparted is precious. So, get one for yourself and bid farewell to tension and anxiety.